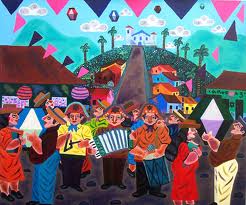 Hi there,
I have seen the misconception of the origin of the name forró being passed around for too long.
And I am tired of it.
Forró is just short for Forrobodó which means "great party" or "commotion" (in Portuguese); itself a corruption of “fauxbourdon” which was used in the Portuguese court to define a dull party.
This has also been proved by the great Brazilian folklorist and historian Câmara Cascudo, who studied the Brazilian Northeast (culture? region? or Brazil's Northeast?) through most of his life.
The suggestion of forró being a derivative of the English expression “for all” comes from the belief that in 1900, the English engineers on the Great Western Railway of Brazil, near Recife, would throw balls on weekends and classify them as either only for railroad personnel or for the general populace ("for all").
This was reinforced by a similar practice by the USAF personnel stationed at the Natal Air Force Base during World War II. The reason why the theory cannot be accepted as true and unrelated is that before the USAF were stationed in Natal, the name "Forró" was already in use.
Postado por Helena Rios Angel Nenhum comentário: 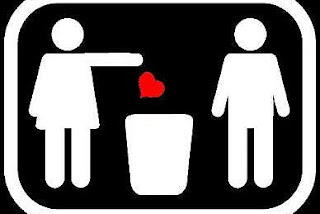 It is finally time to move on.


I tried to understand.


I asked if you were going to be there in the future, you said yes.


On Saturday night, bowling with new friends from work


Drinking with new partners in life,


Maybe my favorite wine, maybe at our favorite place


I now understand what you were doing


You were letting the options opened,


I begged you to let me go, to end what I could tell was gone


You needed space, started things from the beginning again

I cried, I begged, I said


You said yes “me too” and left me hanging in there
Postado por Helena Rios Angel Um comentário: